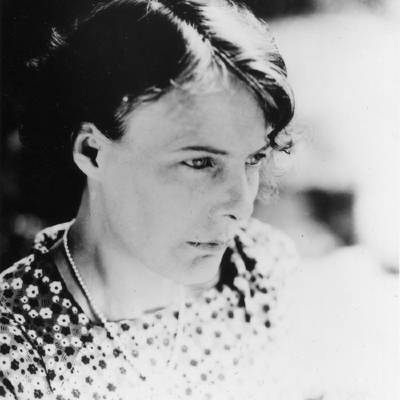 Hilda Doolittle (September 10, 1886 – September 27, 1961) was an American poet, novelist, and memoirist, associated with the early 20th-century avant-garde Imagist group of poets, including Ezra Pound and Richard Aldington. She published under the pen name H.D.
Hilda was born in Bethlehem, Pennsylvania, in 1886; she moved to London in 1911, where she played a central role within the then-emerging Imagist movement. H.D. showed Ezra Pound some of her poems; he was impressed by her poems’ closeness to the ideas he had been discussing with Aldington, with whom he had shared plans to reform contemporary poetry through free verse, the tanka and the tightness and conciseness of the haiku, and the removal of all unnecessary verbiage. In summer 1912, the three poets declared themselves the “three original Imagists”, and set out their principles as:
*Direct treatment of the ‘thing’ whether subjective or objective.
*To use absolutely no word that does not contribute to the presentation.
*As regarding rhythm: to compose in the sequence of the musical phrase, not in the sequence of a metronome.
H.D. had a deep interest in ancient Greek literature, and her poetry often borrowed from Greek mythology and classical poets. She befriended Sigmund Freud during the 1930s, and became his patient in order to understand and express her bisexuality, her residual war trauma, her writing, and her spiritual experiences.