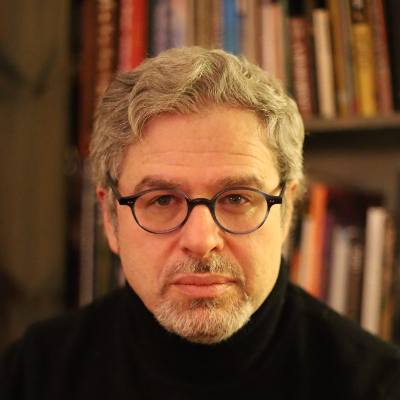 Igor Satanovsky (b. 1969 in Kiev) is a visual artist, poet, editor, translator, curator, and award–winning book designer. He had solo art exhibits at the Zverevsky Center of Contemporary Art in Moscow (2019) and Outpost Gallery II in NYC (2017); and collaborated with Boris Lurie Art Foundation on organizing and curating various International art projects since 2010, including Boris Lurie’s retrospectives at Berlin Jewish Museum (2016) and the State Russian Museum in St. Petersburg (2019). Igor is Chief Editor of Novaya Kozha, a Russian-language almanac of arts and letters, and a recipient of the 2021 David Burliuk Prize (Otmetina) for experimental poetry. He authored seven collections of poetry and two albums of graphics. He is a member of the editorial boards of A Dictionary of the Avant-Gardes (Richard Kostelanetz, various editions, USA/UK, 1999–2019) and Cultural Dictionary of the 21st Century (Moscow, 2020).