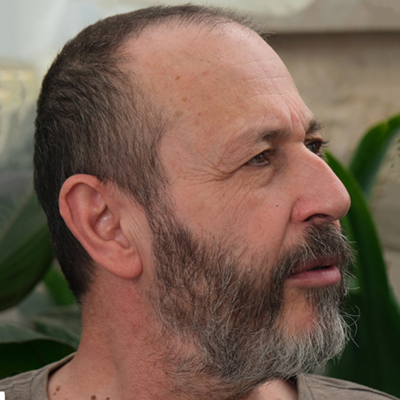 Almost as soon as he was born, which took place in 1960, in Novosibirsk (Russia), Nekoda Singer began to indulge in fantasies, both verbal and visual. Dreaming of faraway continents at the age of 13, he began to work with animals in a local zoo, but after finishing school, instead of sailing around the world, he started to work as a set decorator for a local opera, as well as to study at the Institute of Theatre, Music, and Cinematography in Leningrad (now St. Petersburg). After that, he spent several years working as a garbage collector in Leningrad as well as a Latvian folk craftsman in Riga (Latvia). In 1988, he finally settled in Jerusalem (Israel). In 1991, together with Gali-Dana Singer, he wrote The Manifest of Neo-Eclecticism. Since then, he constantly has been breaking the laws of this radical art movement and dismissing himself from it. His artwork has been displayed at more than 60 solo and group exhibitions in Israel and abroad. His 5 books of fiction were published in Russian and Hebrew. He is a co-editor (with Gali-Dana Singer) of the Russian and Hebrew literary e-zine Nekudataim – Dvoetochie (https://dvoetochie.org/).