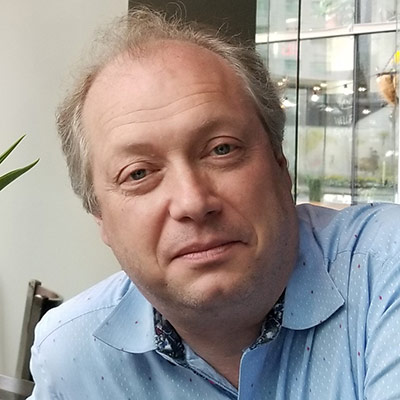 Ilyinsky Pyotr Olegovich was born in St. Petersburg (Leningrad).  Since childhood, he was torn between natural sciences and liberal arts. He graduated from Moscow State University, then received a PhD in biology. He completed his post-doctoral studies at Harvard Medical School, and in 2008-2016 he taught at Boston University. His first non-scientific publication came in 1989 in the magazine “XX century and the World”, a harbinger of Russian political reforms. He published several books in Russian: “A change in Colors” (2001), “Carving the Stone” (2002), “A Long Instance of Birth. Meditating on the History of the Ancient Rus” (2004, 2nd ed. 2017), “A Legend of Babylon” (2007), “At the Very Edge of the Forest” (2019). His novel ‘The Era of Enlightenment’ is about to be published in Moscow. Many essays, short stories and verses have been published in various Russian literary journals around the globe.  He is a member of St. Petersburg Writers Union.