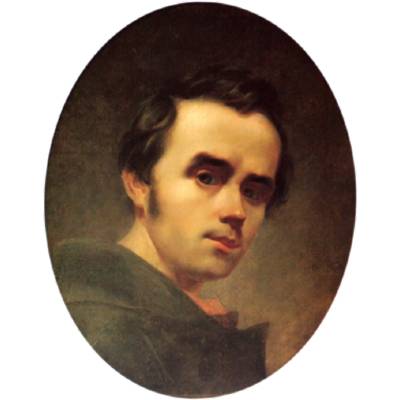 photo by Self-potrait (oil on canvas)
Taras Shevchenko
Born in Moryntsi (Ukr. Моринці), a village in central Ukraine, in the Zvenyhorodka district of the Cherkasy Oblast

Taras Shevchenko (1814 – 1861) was a Ukrainian poet, writer, artist, public and political figure, as well as folklorist and ethnographer. His literary heritage is regarded to be the foundation of modern Ukrainian literature and, to a large extent, the modern Ukrainian language, though the language of his poems was different from the modern Ukrainian language. Shevchenko is also known for many masterpieces as a painter and an illustrator. Born into serfdom, he began writing poetry early in life, while still a serf. In 1840, his first collection of poetry, Kobzar, was published. According to Ivan Franko, a renowned Ukrainian poet in the generation after Shevchenko, “[Kobzar] was “a new world of poetry. It burst forth like a spring of clear, cold water, and sparkled with a clarity, breadth and elegance of artistic expression not previously known in Ukrainian writing”.