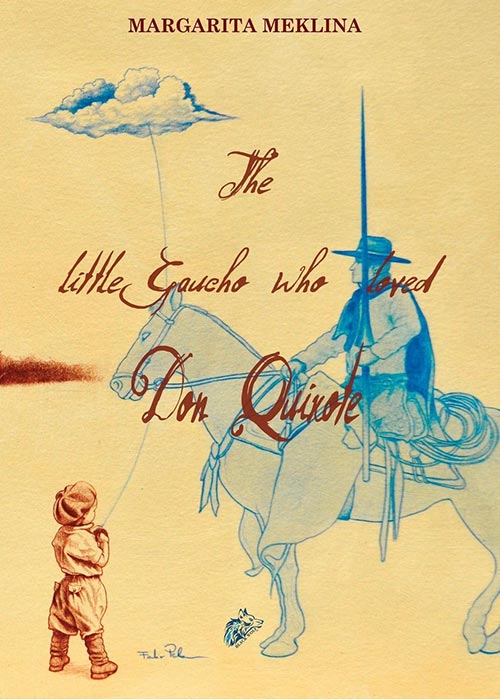 The Little Gaucho Who Loved Don Quixote
by Margarita Meklina

Loosely based on the biography of the Russian-born writer Alberto Gerchunoff, who became famous for his portrayal of Jewish gauchos living on the Argentinean pampas, the story of Naftali follows the adventures of a twelve-years old boy who escapes the Russia of the 19th century and moves with his family, under the sponsorship of the philanthropist Baron Maurice Hirsch, to a Jewish colony in Argentina, in the hope of finding a life free of the Russian Tsar and anti-Semitism. Along the way Naftali befriends a local eccentric with a dog so old that it has to be pulled on a platform with wheels; a boy who collects maps and uses them to travel in his imagination in defiance of the Pale of Settlement; a book peddler who introduces him to Cervantes’s Don Quixote; and young gauchos who teach him how to ride a rhea. Naftali’s story becomes a full-blown account of the childhood of a future writer who, possessed by dreams of Don Quixote and haunted by the murder of his father, overcomes the difficulties of immigration and grows infatuated not only with Don Quixote but with everything related to books. The Little Gaucho Who Loved Don Quixote covers not only the panorama of life in the Russian empire and then in Argentinean pampas as seen through a boy’s eyes, but also episodes of Cervantes’s novel that the sensitive and inquisitive young mind compares to his seemingly boring and uneventful life in Russia, imagining for example that Baron Hirsch is Don Quixote in disguise. The novel ends with an image of a mature Naftali who recounts his ordeal during a flood, when he is saved by another “Don Quixote,” a kind and mysterious gaucho, and decides to write a book about Cervantes and his creation. Naftali is well-read, goes to a Jewish school, and meets another original character, Favel Bavilsky, a poet who loves to weave romanticized stories. The novel is peppered with historical vignettes from the Jewish life and the far away past.