Let me start by saying that the international solidarity around Ukraine and the awakening of Europe have been remarkable, and they should be applauded. There is, however, a minority of Western intellectuals, that have taken a position with which I assume many of you are familiar: Putin has been “provoked,” they say, by the US and NATO, which keeps expanding. This position keeps rehashing the same unimaginative narrative that blames the US and Europe for any ills happening anywhere. Whether we are dealing with an Islamist terrorist attack, famine in Africa, or a Russian megalomaniac dictator, according to this narrative, the culprit is always the same: American/Western imperialism. Never the Islamic terrorist or the corrupt African leader or the Russian dictator. Yes, we all know that the US has engaged in unprovoked aggression against other countries. But the fact that the US is sometimes guilty doesn’t mean that it is always guilty. It also doesn’t mean that other countries in the world, mainly non-Western countries, should be given a pass for their own imperialism. Anyone with a modicum of reason should understand this.

Like Trump, Putin did not appear out of thin air: just like him, he is a product of a specific society and political system, and unless one has a clear understanding of this type of society and system, one is incapable of dealing with its products. Before Putin was the President of Russia, during Communism, he was an officer of the KGB, which may have been the biggest criminal organization in the history of humanity. It is not the purpose of this essay to prove this point — if you are unfamiliar with the history of Communism and of the various types of Secret Police organizations that, in its name, have tortured, imprisoned, and killed more than 40 million people around the globe, there are plenty of books that could instruct you. You may retort that whatever Putin may have been, he is certainly not a Communist now, and there is nothing Communist about contemporary Russian society. Indeed, neither Putin nor Russia are Communist. But in the same way that we analyze the conditions that made Trump possible, we need to remember that before he was a politician, he was a boisterous celebrity created by the same networks that can’t stop attacking him now, one needs to go back to where Putin and contemporary Russia are coming from. Russia’s economy, like that of China, is wildly capitalist, but its structures of power are very much grounded in the structures of former Communist societies. A major reason capitalism is so corrupt in these countries is that, when Communism fell, their first entrepreneurs were the members of the former nomenklatura — they were the only ones who had money to invest. Many of today’s Russian oligarchs once recited The Communist Manifesto or are the privileged children of those who did.

But these were not “real” Communists, you’ll say! Indeed, they weren’t. I lived for 25 years in a Communist country and I never met a “real” Communist. You know why? Because “real” Communists only exist on Western campuses; in the books written by American activists; in the ivory towers filled with naïve academics divorced from reality. In the palpable reality in which 40 million people died and many more had their lives destroyed, the only real Communists that existed were opportunists who, as soon as the opportunity presented itself, used the power given to them to abuse innocent people and enrich themselves.

This may be true, you’ll say, but the fact that this happened in these countries is no reason to stop believing in the ideal! If the deaths of millions of people is not enough for you to change your ideal, let me try to bring in an authority. In Specters of Marx, the French philosopher Jacques Derrida claims that Marx himself was not a Marxist. This may seem like sophistry, but, in fact, Derrida makes a point that could be translated like this: Marxism is the realization/materialization of an ideal, or a theory (represented symbolically by Marx). As soon as this ideal is implemented, it is distorted, because any realized utopia betrays its very essence, which is that of being fiction, and it becomes, logically, dystopia, or, in the words of French philosopher Maurice Blanchot, who was one of Derrida’s major influences, a disaster. This is the reason why “real” Communism doesn’t exist. Every single time a society tried to implement it, it turned into a disaster.

Putin is a specter of Marx. Not because he is a Marxist or a Communist, of course, but because he is the remnant of a history that Western intellectuals, in particular American intellectuals, never bothered to strongly condemn, or even learn, on the contrary. In the ten years I spent in American academia, no one ever bothered to ask me how life was under Communism; on the contrary, I can’t tell you how many times I was lectured on the “real” Communism that, poor me, I couldn’t understand, by people who had never set foot in a Communist country. Often, these are the same people who are telling you that you aren’t allowed to have an opinion about the “lived experience” of people with different skin color than yours. Clearly, not all “lived experiences” are created equal.

Today, American academia is full of specters of Marx. If you think that invoking this specter is irrelevant for this particular historical moment, this is only because, unless you are a historian or a scholar specializing in Russia and Eastern Europe, or one of their students, what you’ve learned in American academia about Marxism and Communism comes, very likely, from some of the countless dogmatic activists that now pepper each American university and brainwash generations of students with their wooden language and binary, victimist ideology. When I was in academia, these activists could be found only in the humanities, mainly in English departments; now, they are almost everywhere, and their language is hauntingly familiar to all of us from former Communist countries.

I hear that some idiots in Canada and France are canceling the Canadian dish called “poutine.” On the other hand, in the States, no one seems to have a problem with the name of a famous New York bar that has hosted many remarkable literary events over the past quarter-century: “KGB.” According to the bar’s website, its owner, who appears to be one of those idealists (interestingly, and, somewhat ironically, in the current context, he is the son of a Ukrainian immigrant) with a penchant for postmodern irony, chose this name in the early 90s to honor the bar’s history as a speakeasy and as a covert institution. I get it: KGB as in 007 (though the images in the Red Room are less 007 and more 1917). The name has something cool about it—the coolness of a covert Soviet institution, which happens to be the criminal state police known as the KGB, also known as the mentor of one Vladimir Putin. I’ve seen this kind of “ironic” exoticization that intellectuals of a certain persuasion project onto the history of my part of the world also when I was a resident at MacDowell Colony. For hours, two dozen writers and artists—some of whom, I am sure, were working on pieces with serious ethical dilemmas—danced under the special-effect wallpaper created by one of the artists, which consisted of “cool” images of hypnotic marches of pioneers from North Korea (the artist, by the way, was a very nice, intelligent and well-intentioned young man). I wonder how many American intellectuals would feel just as comfortable dancing while images with the Heil Hitler salute covered their walls; or how many would recite poetry or read stories in a bar called, say, Gestapo or The Ku Klux Klan, two other covert organizations.

The reason, my dear American friend, this double standard exists, the reason why in the United States the intellectuals minimalize or choose to ignore, the horrors of the history of people from my part of the world, is simple: they can’t stop idealizing a system that, at least, in theory (and the distance from theory to practice is as big as the distance from Marx to Marxism), is very appealing. They refuse to see reality in the name of fiction.

To be very clear: I am not inviting anyone to “cancel” anything. I understand very well how, sometimes, one can reverse the meaning behind a name by changing the context. Rather, I am inviting you to pause and think, and to go to the roots of Putinism. I hope that now that he is doing overtly what he has been doing his entire life behind closed doors, may give you the curiosity to find out where he is coming from. I am hoping that those of you prone to soul searching—“What could we have done to stop this war?” etc.—and who have been looking for the answer, like some of my American friends, in NATO’s expansion, which has supposedly “provoked” Putin, (as if NATO were forcing anyone to join it, when, in reality, it is all the countries in Eastern Europe that are begging it to accept them to protect themselves from the aggressor that has been bullying them since forever), I am hoping that you may, finally, connect the dots between his career as an officer in what was once the world’s biggest criminal organization and his threat to us all with nuclear war. 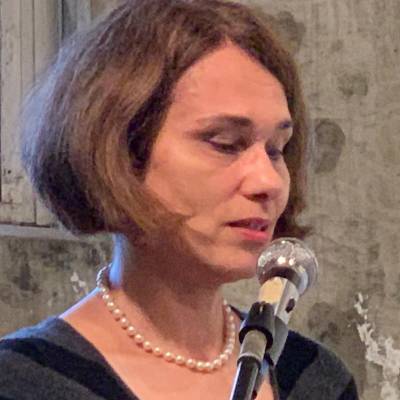