Chaim Soutine “Return from School After The Storm” [1939] (fragment)
Katia Baghai and Victor Enyutin. The Artist as an Unwitting Prophet of the Apocalypse

CHAIM SOUTINE’S “RETURN FROM SCHOOL AFTER THE STORM”

We see children “caught” by the artist’s inspiration; trapped, as it were, between two dangers – nature and civilization. Here, as elsewhere, Soutine dares to challenge the consumerist worldview.

The two children are deprived of a wholesome representation: their faces and bodies are deformed. Soutine the radical expressionist artfully “misdepicts” children’s faces and bodies through formal effects which seem to penetrate human flesh. Soutine not only shows children of his own time as deformed by conditions of life between two world wars, but he also predicts the world of the near future, i.e. the Holocaust, as well as the 21st-century wars, enhanced with high-tech bombing which makes the murder of civilians, including children, seem mundane. In the meantime, the super-wealthy conservatives are obsessed with so-called “austerity measures” for the purported benefit of the country, the poor, the needy, the elderly, the disabled, etc.

We, humans, are spoiled by our belief in God’s care and concern for our well-being, survival, and prosperity. This results in our conviction that everything out there in the world was created by God for us, for our needs, for our insatiable appetite, and our satisfaction. A possibility that nature has its autonomy, independent of our needs, desires, and expectations, and that it deserves our respect, if not reverence, doesn’t occur to us. We are convinced that what we see is the objective world and reality, and this conviction gives us free rein to calculate: what else can we get, what else to take from our natural environment? In other words, we assume that nature, like mother’s breasts, exists for one purpose only — to serve our whims and desires.

Nature, if seen for what it is, is not very friendly to us human beings. In Soutine’s landscapes, we feel the stubborn power of nature’s resistance, which Soutine anticipated over eighty years ago, and which, for us, is no longer a vision but a reality: global warming, menacing our safety, security, and comfort. In the first half of the 20th century, Soutin predicted nature’s response to our voracious greed as well as to our complacency, by showing nature as a warning to us, and by artistically depicting nature’s vengeance. 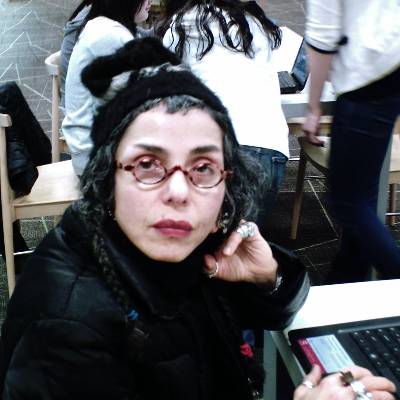 Katia Baghai and Victor Enyutin live near Seattle, Washington State. Victor emigrated from the Soviet Union in 1975 and has authored numerous books of poetry and prose. His books in Russian, published in California, include “The Sixteenth Republic: the Soviet Immigration to the West” (1982) as well as many collections of poems and surrealist prose. He taught at the University of California at Santa Cruz & Irvine as well as at the Defense Language Institute in Monterey. Katia studied psychology. They started a blog together, writing about arts, films, poetry, and socio-cultural issues, and taught film together.